We acknowledge the achievements made by the men and women of our village and the impact they had on our community. 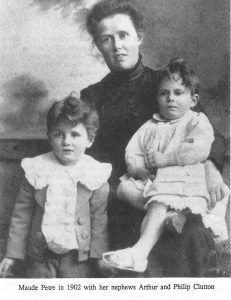 Maude Petre moved to Storrington in 1907 where she rented Mulberry House in The Square. She transformed an old outbuilding in the garden of the house for Father George Tyrrell to live in and where he died in 1909.

When war broke out she actively did what she could to help the war effort. When Belgian refugees arrived in Storrington she provided accommodation for two elderly ladies and a boy and a girl in her home. Local memories say she also made the cottage where George Tyrrell had lived into a small hospital but this would not have been an auxiliary military hospital as Storrington was too far from a big town or railway station to be effective as one.

In November 1914, a friend, Paul Desjardins, asked her to help in the war hospital he had set up at Pontigny in north-central France. By March 1915 she was there with her maid, Alice, helping to keep the dormitories clean and giving some English classes. She returned home when her dog, Ben, became gravely ill but returned in the Autumn of that year to nurse and was there at the time of the Battle of Verdun (1916).

In November 1918, Arthur Bell, a literary friend living in Storrington, died, leaving Maud as his sole legatee. She arranged for him to be buried beside George Tyrrell in St Mary’s Churchyard, leaving one place beside them free for herself. Her strong sense of civic responsibility led her to being actively involved in numerous local activities. She set up a soup kitchen in the village, served on the housing committee and put on plays and dances. Despite her busy schedule of social involvement and writing, she maintained her life of prayer, reading and reflection. She continued this involvement into the 1920s, becoming President of the Storrington Women’s Institute, an office she held from 1922 to 1925.

In 1922, and now the owner of Mulberry House, she established a cottage hospital in the property that George Tyrrell had lived in. The opening was reported in the Worthing Gazette newspaper of June 21, 1922, which gave

a full account of what Maude regarded as a purely experimental venture. The hospital had a nursing sister and was intended for cases of illness sent by the doctor and not for convalescence or persons not requiring treatment in bed. The newspaper reported that those using it were required to contribute to the cost “according to their means and goodwill” but as it was realised that such payments would not cover all costs, subscriptions and donations were welcomed. Maude set up an Advisory Committee to share the responsibility of running it.

Today this building is known as Malt Cottage.

At this time Maude was Chairman of the Parish Council.

In 1923 she was added to the Committee for the Storrington Village Hall and Reading Room when plans for the enlargement of the Hall were being discussed. She was duly elected Chairman of the Extension Committee through to 1925.

She seems to have been everywhere – her journal noting a meeting of the drainage committee which she chaired, the death of a mother and her unborn baby whom she helped to nurse and countless meetings of the WI and Parish Council. She was also involved in setting up the Labour Party in Storrington providing her home for its meetings.

Maude divided her time between France and England: family and friends were important to her and she visited them frequently. In 1925 she sold Mulberry House and built a smaller one, but retained the cottage where Tyrrell had lived.

She also found time to write a short history of the village which included her memories, along with another resident, John Joyes, a miller. A few words were given on local residents including literary and artistic people who had lived or stayed in the area during her time – notably Paul Hardy, Francis Thompson, Alice Meynell and Max Plowman. At the time of writing this she was living in Erewhon, Cootham.

In 1939 Maude decided to sell her home and lease a flat in London. She was 75 years old and in March of that year there was a large farewell party for her. Although she died in London (16th December 1942, aged 79) she was buried in St. Mary’s churchyard, Storrington, in the plot belonging to her between the grave of Arthur Bell and the wall. Her will stated her wish for the funeral to incur as little expense as possible and that only a small inexpensive cross to be erected on the grave. 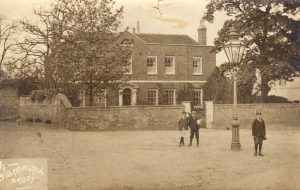 Walter Drewett was a postcard publisher, first at Steyning then at Storrington. He was born in Steyning on February 13, 1869. His parents were Ellen Drewett (née Duke), born in Littlehampton, and Walter Drewett, born in Steyning. Walter Drewett senior was a pork butcher in Steyning High Street; later he became a cattle dealer and, according to Alan Barwick, curator of Henfield Museum, also the manager of Steyning Market. He died in 1898, aged 61.

The 1891 census locates the Drewett family at 7 Southdown Terrace in Steyning, and Walter had left home. He was working as an assistant to a Bognor draper, Frederick Parson, with whom he boarded. By 1901, however, he was back in Steyning, working as a photographer. He was unmarried, and, as far as is known, never did marry.

Walter Drewett specialised in photographing landscapes and outdoor events, such as garden parties and parades. Sometimes he took pictures of individuals outside their homes or in the street, but there is no record of his undertaking studio portraiture.

Drewett seems to have begun postcard publishing in 1903. Alan Barwick, who has made a special study of Drewett cards, reports that the earliest postmark that he has found is March or May 1903 on a card with an undivided back showing The Square at Storrington. The captions on the very earliest cards are written in plain blocky capitals of fairly uniform size on transparent slips. However, Drewett soon abandoned using slips and changed to writing the captions in reverse lettering directly on his glass plate negatives. At about the same time he switched to a less regular style of lettering and started adding dots, dashes, squiggles or short curving lines (often with a characteristic forked end) for decorative emphasis. Often he arranged the words in wave-like curves. Some of his captions now appear tired and clichéd, for example “In an old fashioned street in an old fashioned town” (Steyning) or “Homeward the ploughman plods his weary way” (a view of Jacobs Hill, Thakeham).

Drewett may have taken up photography in the 1890s or late 1880s, long before he began publishing cards. Although Drewett began his postcard publishing career in Steyning, he soon opened a newsagent’s shop in Storrington on 1904 on the east side of Church Street, next to a little lane or twitten. However, it seems that he may have commuted daily to Storrington by bicycle from Steyning where he continued to lodge or live with members of the family. When the 1911 census was held, he was recorded at 7 Southdown Terrace in Steyning, staying with his widowed mother and brothers Ernest and Edwin.

Drewett always had a selection of his latest cards on display in the windows of his Storrington shop. Nearly all the cards that Drewett issued are real photographics that he printed himself, but for some reason he had a few collotypes made, including at least two views of a military camp at Sullington, which probably date from 1905, and a view of Storrington High Street.

Drewett died aged 81 on April 22, 1950, at Budgenor Lodge, Easebourne, near Midhurst. In 1963 the site where he had his Storrington shop was redeveloped and some offices were built with flats above (Stockbury House).

It is not known precisely how many cards Drewett published but it is thought  that his total output was well in excess of 1100 cards and may have been as high as 2000 cards. http://www.sussexpostcards.info/gallery.php?PubID=94&PicID=2

William was born c. 1871 in Crewe, Cheshire to John and Ellen Rhoden. John was a cattle dealer and butcher. In the 1891 census William is a school master in Cornwall but by the census return in 1901 he is teaching in Haslington, Cheshire. He married his wife, Lillian Kitchen, in Nantwich, in 1901 and their children, John Kennedy and Maxwell Daniel Rhoden, were born in Storrington. 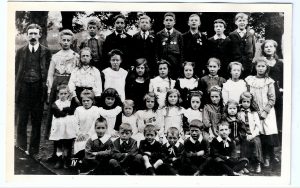 William  became headmaster of the Storrington village school on 6 May 1901, Lilin became the assistant mistress. He found the school largely unfit for purpose. He embarked upon a programme of modernisation which included the addition of windows to provide necessary ventilation and illumination, electric lighting, and adequate lavatories with ( when it became available ) mains drainage.

He was involved in the village cricket team and after 31 years as headmaster, William retired on the 29 April 1932. 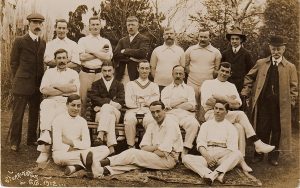